Flying through the air at 120 mph, 13,000 feet above the ground with nothing but a chick carrying a huge backpack strapped to you kind of puts things in perspective. 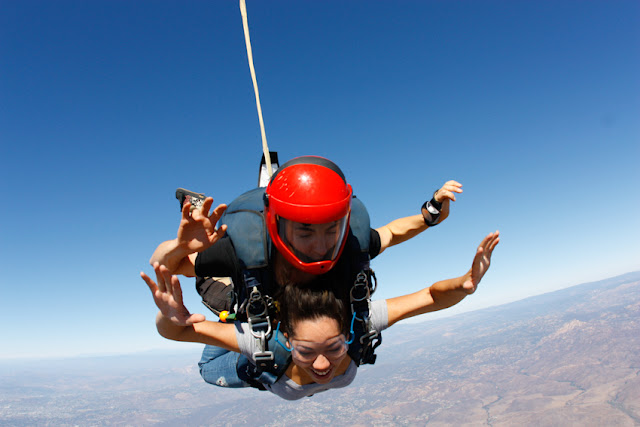 For those few precious moments when all I could hear was the air whizzing past and feel gravity pulling me towards the Earth... I felt completely alone.  Completely aware. Completely silent and utterly blissful.

I've never found that level of peace before. And believe me, I try daily.  Brief moments of my own perceived nirvana are nothing in comparison to that feeling I felt the moment I flew through the air for the first time. 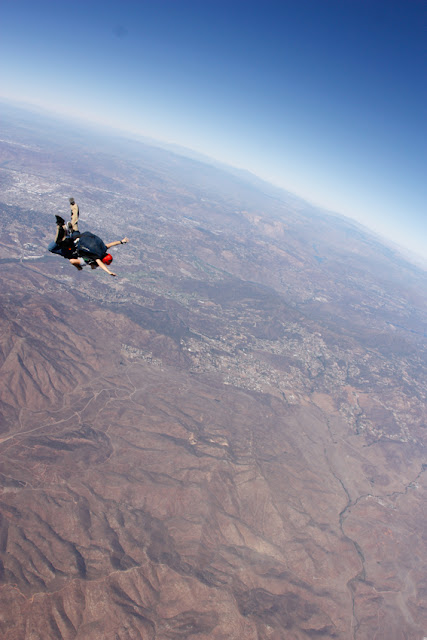 I was eerily calm as the thirteen of us sat closely packed on the small plane we were about to jump out of.  I looked down at San Diego and Tijuana from my window with child-like fascination as we steadily climbed up into the air at a speed of about 100 knots.

Someone busted ass mid-way up, causing my tandem instructor, Vanessa, to gag loudly and hold her handkerchief over her mouth in complete disgust. She vowed to quit her job if she had to endure another "stink bomb" again.  It was pretty damn revolting, yet still a minor downside to such an amazing job, in my opinion. But who was I to judge the person who would literally have a weighty hand on my fate in the next few minutes?  I learned quickly that she was a hard-ass and had well over 500 jumps under her belt. She knew her shit. I felt safe.  And then It was time to go. 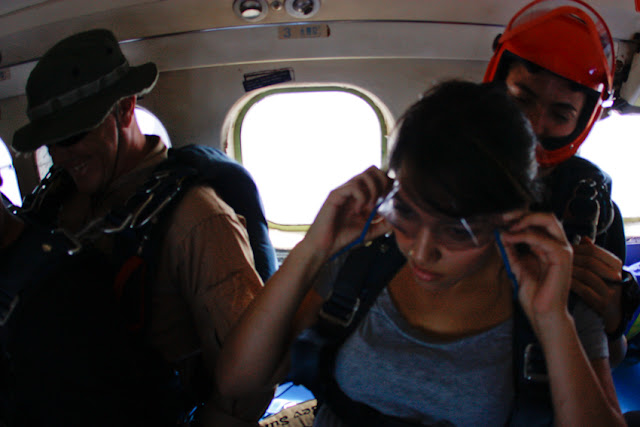 I sat on her lap as she strapped me in and I pulled my goggles around my face tightly, almost robotically, without thinking… like I had done this all before, in a dream, or another life, and was just going through the motions again.  Time slowed down. We neared the open door, I could hardly focus enough to hear anything she said. I just wanted to jump already.  All I remember thinking was:  WOW, it's incredibly beautiful, looks like a photograph… is this real? 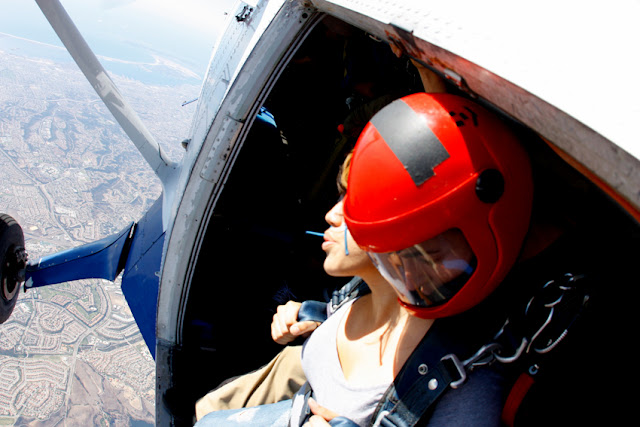 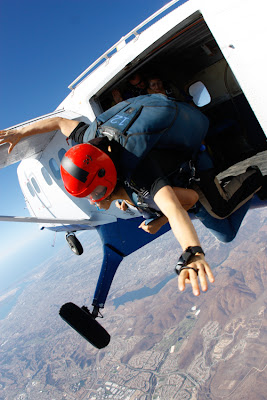 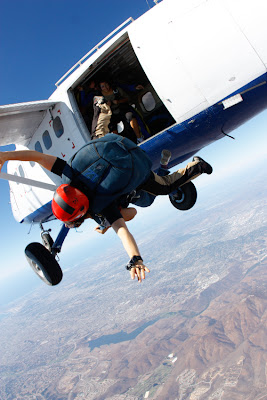 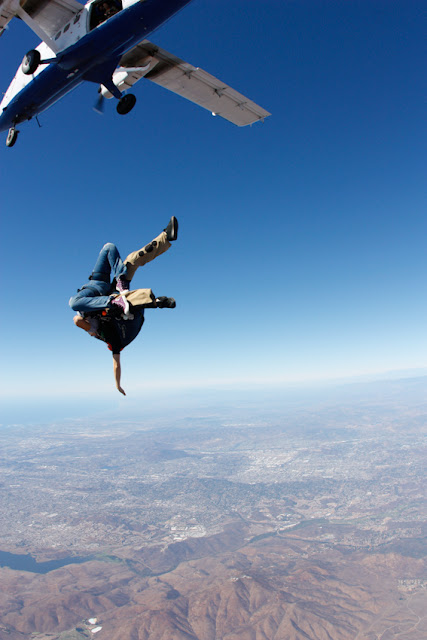 For most of the sixty-something seconds that I was soaring through the air I felt completely silent inside and extremely powerful. I felt like frickin' Superwoman.  It was a wonderful sense of inner solitude… it was just me- apart from the plaguing thoughts and concerns that I seek to escape through meditation, self-talk, and exercise. I was just a tiny speck, floating through the air… being sucked down by gravity to the vast earth below.  This beautiful, perfect Earth that we treat horribly and take for granted.  My beautiful soul appreciating it. Nothing else mattered, I just existed and everything was immaculate.  I don't know how else to describe it.  I guess you could call it a form of enlightenment.  Whatever it was, it was incredible and I was instantly addicted. 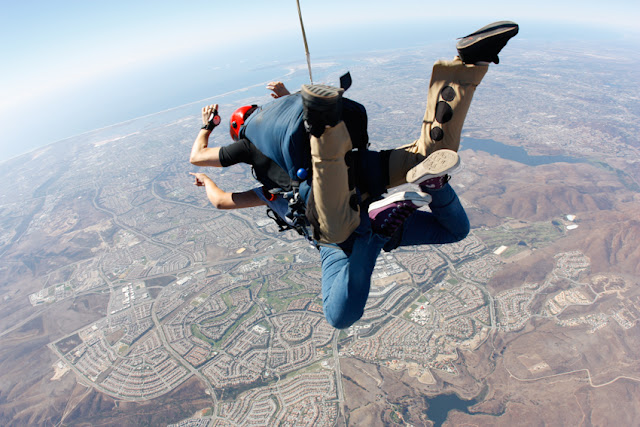 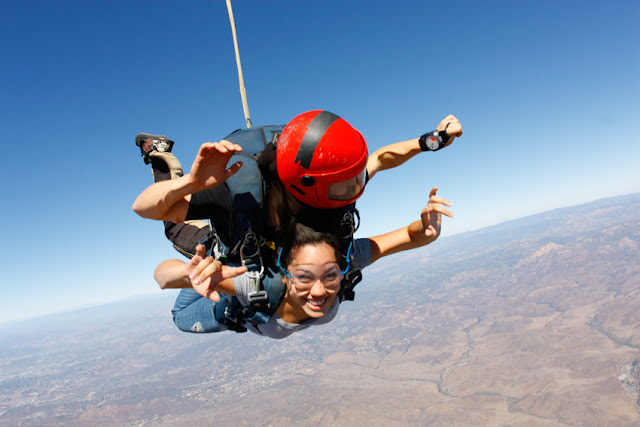 I'm glad I got the photo package but I wouldn't get videotaped/photographed next time… at least once, I'd want to go completely alone and fully enjoy it without needing to "put on a show" for the camera.  I was hootin' and hollerin' for a few moments just so that I wouldn't bore future viewers, but inside…inside,  I didn't want to do anything but enjoy that feeling, quietly with just a huge grin, I wanted to take it all in.

I was slightly disappointed when it was time to pull the 'chute already. 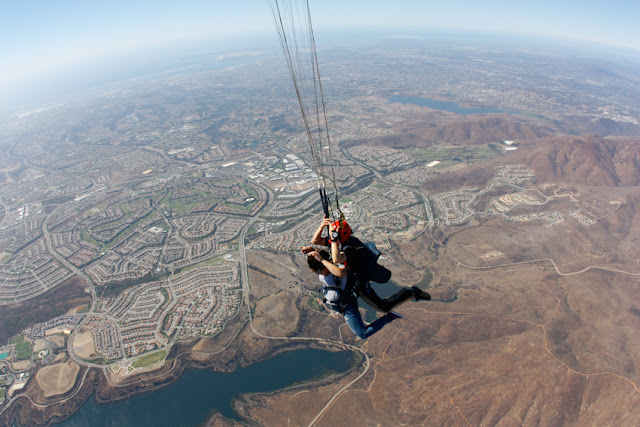 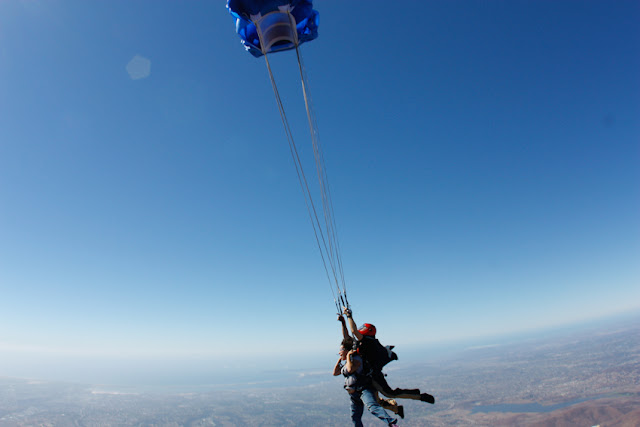 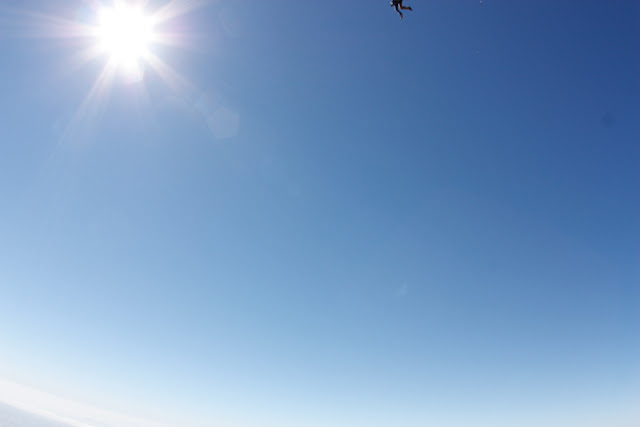 There will definitely be a next time and many times after that, if all goes well. 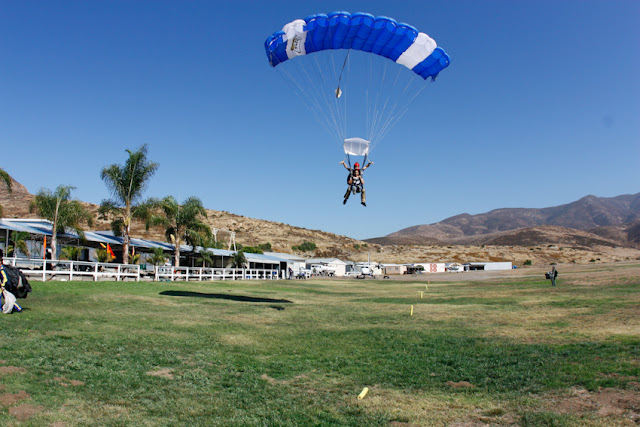 All other sports pale in comparison now… how could I go back to just snowboarding when I felt what it was like to dive off a plane and fly like a bird?  I mean, of course, I will snowboard, ride quads, and drive dangerously fast again. BUT my heart has fallen for skydiving now. I've had a taste… and I want more!!! 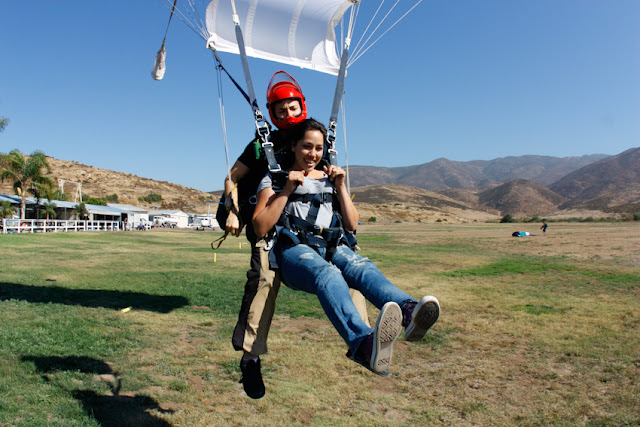 In case you're considering it, JUST DO IT! Life's too short not to. Hands down- it's the best high money can buy.