It's almost 4 A.M. over here on the East coast and I'm a little too wired to go to bed after the abundance of fortunate events that comprised my day.  Basically- today was awesome.
As you all should know by now, I'm here in Charlottesville, Virginia taking a 5-day photography workshop followed by a 3-day Festival of the Photograph. The second year of the workshop which is sponsored by National Geographic, Canon, Apple, Adobe, Leica, Getty Images, and others. That means that in addition to almost a week long of learning from some of the most amazing photographers alive today, we get to borrow the latest Canon and Leica gear and have one-on-one lessons from experts on Aperture and Photoshop in a lab of MacBook Pros... so sick.
On Saturday, after the first session of the workshops, our local liaison suggested we hit up an annual block party to meet the townspeople and throw back some brews with 'em.  This was the perfect opportunity for us to really get a feel for Charlottesville and we came to find that C'Ville is pretty damn chill and very welcoming.  People immediately warmed up to us and we met many fellow artists, filmmakers, and documentary photographers with much insight and suggestions for sight-seeing and local hot spots.
We also met Kelly and Al, self-proclaimed "new Southern" gentlemen. 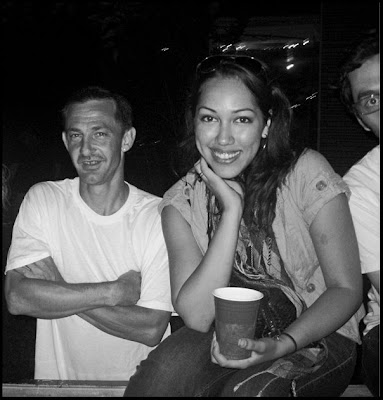 ^ This is a photo of Kelly on the left and that's not Al on my right, that's Jeff- a fellow student.  I unfortunately didn't photograph Al but I will get some pictures from the other photographers.  What I love about it here is that I'm not the only one madly clicking away and making other people uncomfortable. The other photographers are making ME camera shy, it's a great change.
Anyhow, Kelly is an integral part of my story because his story touched me.  As we're sitting in the back of a broke down pick-up truck behind a house at the block party, Kelly and Al are talking about Kelly's mama and how much Kelly loves her and takes care of her.  His mom is on an oxygen machine and has suffered from pneumonia 4 times in the past year.  Kelly stays home with his mother everyday taking care of her and he had nothing but lovely things to say about her.  She even called him on his cell while we were laughing about some ridiculous joke and got her in on it.  Call me a softy, but I loved how much he loved his mama.  It made me think about my grandma and taking care of her while she was dying from pancreatic cancer two years ago.  It also made me think that he would be a great subject for a photo story.  So I got his and Al's phone numbers and called them up on Sunday to see what they thought about it, but there was no answer on Kelly's phone.  I left a voicemail and tried calling Al.  He told me where Kelly lived and said to just stop by.
So that's what I did today-  but Kelly wasn't there... he had gone to jail the night I met him for distribution of illegal drugs (which he's fighting against and will hopefully be out by next week).
Instead, I was warmly welcomed by another family friend who brought me inside to introduce me to Kelly's mama, Charlotte. 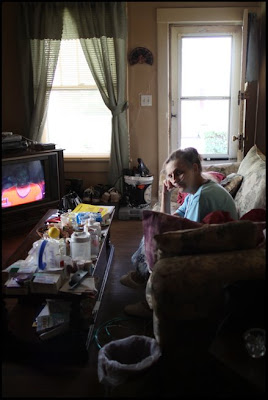 Charlotte was on the phone with Kelly in jail and he gave her the O.K. when she wonderingly told him, "some young girl with a camera is on the front porch saying she met you at a party."
She was caught off-guard by my arrival but was incredibly warm to me and invited me into her home, allowing me to photograph her while she told me stories about her life and especially her love for Kelly. 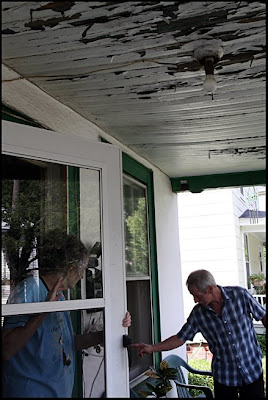 ^ Mel pointing to the BB gun shot hole some kids put through their front window on the same night Kelly got taken to jail.
I spent about two hours at Charlotte's home this afternoon.  She really made my day and Mel had some great stories as well.  They both have sad lives now (he helps take care of his dying mother in addition to Charlotte) but that wasn't always the case.

I have about 150 pictures that I need to sort through and I'm definitely going back for a couple more hours in the next few days before I make my final presentation of the story at the festival on Thursday.  Should be exciting =)
Around 7:30 P.M. we attended a backyard BBQ and photo presentation at one of the staffs' residence right near our convention center. 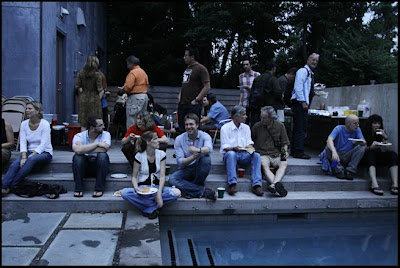 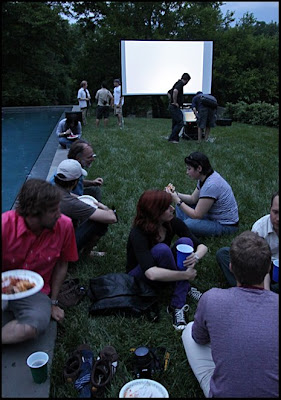 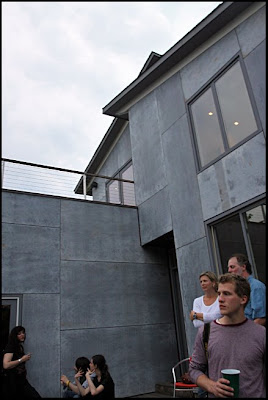 ^ The architecture was the most modern I had seen in Virginia and reminded me of that cold L.A. warehouse motif. 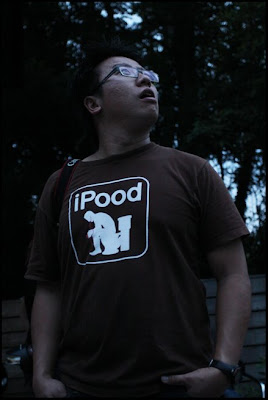 ^ John Heng, fellow student, is an outstanding photographer from Singapore and such a riot to hang out with.  He teaches me something new and technically savvy about photography everyday.
After the breath-taking and extremely humbling presentations by the instructors:(look 'em up, seriously)
James Nachtwey, David Alan Harvey, Eugene Richards and Larry Fink, we went off around midnight to help Jessica shoot her project in some creepy woods area. 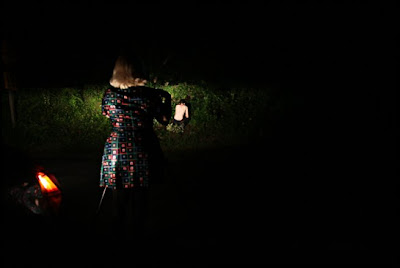 I seriously have not been that bone-chillingly scared in a really long time.  I felt the presence of spirits or some wild animals were lurking in the bushes, 'cause I swear, WE WERE NOT ALONE!! 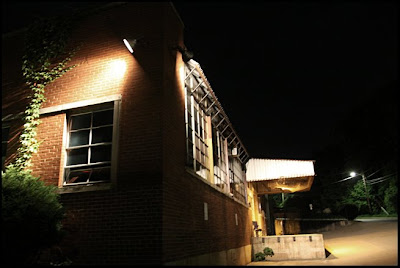 At the second location, Jessica was photographing tombstones (yes, tombstones) on the opposite side of the street while I was snapping away at this eery looking building.. and then suddenly I heard the sound of someone playing the piano from inside.
It was 1 A.M. and the place looked deserted!! I was completely freaked out, such a baby! But I almost screamed like a schoolgirl as we ran back to the car... ok maybe I did.. just a little.
Something about Virginia at night that just does not sit right with me... it's haunting. Really, it is.
But nevertheless, I really do like it here a lot and I look forward to getting to know Charlotte more and meeting other people with similar stories here and everywhere I go.
It's all about love for the people who gave you life and love you unconditionally.
I love you mama!! Have a great day everyone... tell 'em you love 'em.