How I snuck into Coachella... all three days!

It's such a pleasure to begin my first public blog entry with one of the most memorable weekends of my life that occurred this past weekend, April 17-19th at the Coachella Valley Music and Arts Festival in Indio, CA.

Now, if you aren't aware- this marks the 10th year of the festival that brings over 100 of the most legendary and rising stars in music and about 150,000 happy fans over the course of three days to party on one ginormous field in the middle of the desert. This was one of the biggest and best music festivals I've ever been to, namely due to the fact that there was so much room to roam and explore the vast visual stimuli and the grass was so readily available for much needed rest stops- and the performances were hella good.

Granted, I arrived at sunset on all three days, so I didn't have to endure the grueling heat or the massive lines getting into the parking lots since I took a shuttle each day. Instead, during those peak sunshine hours, I lounged poolside at the Riviera Resort in Palm Springs, about 20 miles away, at the 'Music Loves Fashion' Coachella Party.

The Riviera was SO nice... not only for the 5-star treatment but the decor was ill!!
This place has been a hot spot for celebs since the 60s and was recently renovated but has still kept that fabulous retro feel.

Walking through the foyer before the entrance to the pool area, these lovely portraits stood out to me... and upon closer review I came to realize that they were comprised of hundreds of tiny 10-cent money pieces from Guatemala!

Funny how one man's pocket change can create priceless pieces of art... that are probably very pricey!

My adventure begins here at the Riviera on Friday afternoon, but let me give you a little background information.

I decided one week prior that I was going to Coachella... for free. Not because forking out $300 doesn't seem practical for me right now (cause it doesn't), but because I knew that I could. And, I knew that it would be a great opportunity to take photojournalistic pictures for my portfolio and scholarship applications.

I saw that Statefarm Insurance was one of the sponsors and, since I've promoted for them on numerous occassions over the years, I have some of their promotional gear- particularly a big canvas tote with the logo largely displayed on one side. I've used this bag (and an air of confidence) to walk in to many a concert at the Verizon Wireless Ampitheater in Irvine so I figured it was definitely worth a shot.

Since I wasn't really working for Statefarm, I perused Craigslist to see if I could find any other promotional work while I was out there to kill two birds with one stone. A couple emails later, I was hired to promote a fashion line at the Music Loves Fashion Party, which happened to have a free shuttle to Coachella. =0)

I didn't have to work Friday, but it was the first day of the party and there was an open belvedeer bar and bbq, so I decided it was a worthy detour on my way to Coachella... and hey, a free shuttle so I could party hardy all the way there.

I drove out to the party by myself, anticipating to meet up with some friends later, but found their names weren't added on the list through facebook for some technical difficulty... so they went on to Coachella without me... while I enjoyed the good life back in Palm Springs.

The free Belvedeer was flowing like water and the service was superb.

Now, This is what I call a party.

And after 30 hot and sweaty minutes, we had arrived...

^ These are some interesting strangers I met on the shuttle.. I thought they made fabulous subjects 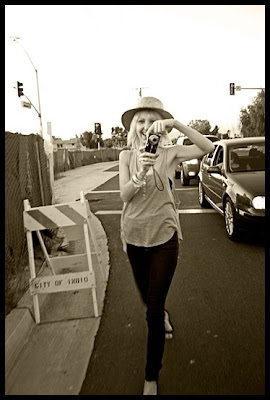 We hopped out of the shuttle about half a mile down from the side VIP entrance to the festival... my perfect opportunity to get past security.

As I neared the entry where guards were checking wristbands, my heart began to race. Luckily, the last linger of my vodka buzz had calmed my nerves a little and the stone cold look on my face told that I meant business. I had no white wristband, but I pointed to my bag explaining that I had no way of reaching my boss to get one since I had left my cell phone back at the booth I was working.. the guard looked in my eyes and said, "I'm sorry but my boss is watching me talk to you and you need to have a band to get in." I gave him a light tap on the arm, smiled warmly, and said, "Don't worry, I won't tell anyone," and I was off! Without looking back, I made my way towards VIP at a rapid pace as I heard him behind me sayin, "Ma'am!" But I had no time to dilly dally! I could hear Franz Ferdinand was playing in the distance as I skipped joyfully and made my way through a second batch of security guards into the VIP.

This year, the festival reached the second highest attendance in it's 10-year history... an estimated 160,000 people over the three days.

^ Franz Ferdinand performing the last song of their set, This Fire

It was just past sunset when the boys finished their set and I was ready with camera in hand to document the wonderful scenery.

The installations reminded me of last year's Electric Daisy Carnival at the LA Colliseum. They have that Alice in Wonderland feel that's so enchanting.

It was such a hippy fest... totally my scene.

So much visual candy to enjoy...

^ Not really sure who this was, but he had a mean yodel.

Inside the Mojave tent

One of the security guards was really cool and let me get up on a platform by the sound guy.

I love to see P.D.A., especially at places like Coachella.. where it just adds to the ambience.

^ It would suck to be behind that guy...

Continuing to explore the plethora of attractions

These kids cracked me up

After a few hours of wandering around solo, happy as can be and snapping pics, I met up with some people I knew back at the main stage

^ The legendary Sir Paul McCartney gave an emotional performance, in which he dedicated "My Love" to his late wife, Linda, who passed away 11 years ago on that day. He sang "Here Today" in remembance of John Lennon and then later dedicated "Something" to the wife of the late George Harrison.

^ Passing on the love that is music.


That was the second time I had seen Paul perform, and it was a bit somber in comparison with his 2006 performance in San Jose. We left half way through his set in hopes of avoiding parking lot traffic, and it worked out well...

35 mins later, around 12:30 AM I was back at the hotel valet in Palm Springs picking up my car to drive all the way out to Fullerton to take a writing proficiency test at 8:30 AM the next morning.


After finishing my mandatory essay exam to graduate in May, I made my way back out to Palm Springs by 11 A.M. for my first day of "work" at the pool party.

Three of us girls were hired by Parish (men's clothing line) to pass out free t-shirts and promotional items to pool party attendees, mingle, and add to the atmosphere of our cabana, which we shared alongside the main sponsors of the event, Belvedeer.

Hangin' in the cabana was the one and only, Shaun White- first snowboarder to win back-to-back gold medals in the Winter X-Games Superpipe, among many other achievements.

^ Tara Reid and some random guy hangin' by the pool


The pool party was a blast, to say the least. After I was done with my shift at 6 P.M. I teamed up with another ticketless friend of mine and set off on another mission to maneuver our way into the festival.
Another "cozy" shuttle ride later, and I walked in once again using the same tactic as the day before. My friend was not so lucky at first, but after waiting around and makin' some funny remarks about Paris Hilton (who had just walked in with Nicky) the security guards warmed up to him and let him pass through when their boss wasn't looking! Gotta love those Marines.

Relaxing on the peaceful, grassy fields just after TV on The Radio performed (I unfortunately missed them...)

Hanging out with strangers, waiting for Thievery Corporation to come on.
I don't think most of these people knew what they were in for.
Thievery performed an amazing set that had the whole crowd on their feet dancing and grooving to their soulful (sometimes latin) body-movin' rhythm. If you haven't heard about them, educate yourself. Please!

M.I.A. and her dancers rocked the house as well with their performance and 80s influenced, glow-in-the-dark fashion ensembles.
She even conjured up a whole mess of chaos when she told everyone to hop over the railings and get on the stage with her. It was hilarious watching people get stopped while others fled and got clothes-lined by Marine security guards. Many people did make it on stage though.. here's a clip from that:
http://www.youtube.com/watch?v=yRZ1BPTSB4I

More videos from the festival and pool party are on my YouTube channel: www.youtube.com/brendabravo1

Ah, and finally, my favorite of the evening- The Killers!!

Brandon and the boys delivered.

The set list was damn near perfect. They played every song my friends and I had hoped to hear and more. A great mix of their old and new.

At this point, I was holding my head in disbelief screaming, "Oh My GOd!! This is too good, I can't take it anymore!!!" each time they'd begin to play another dope track.

After Thievery and M.I.A.'s impressive performances, the Killers were the cherry on my Saturday at Coachella Sundae.

We walked away feeling completely satisfied and buzzing about Brandon's dreamy looks and voice. Stephanie and I giggled like schoolgirls while the boys hummed and sang their songs as we made our way back to the car...
We listened to their album, Sam's Town, and 2 or 3 other CDs while we waited in the stopped line of cars for about an hour and a half.
That night I stayed at a condo, provided by the clothing company,with my fellow co-workers down the street from the Resort.
_______________________________

We were back partying, I mean working, by the pool all day on Sunday as well.
I was a tad more inebriated that day than the previous days, so I had a considerably lower amount of pictures.
Afterward at Coachella, I used my same strategy of saying that I was working and managed to walk in some other gate with 3 other pool party people who were on the same ticketless plight. All ended well... we got in, caught the last bit of My Bloody Valentine and I sobered up just in time to enjoy the Cure.
They sounded phenomenal. Just like heaven.

It was the most fun I could have without spending a dime besides gas money AND getting paid to party by a pool all weekend.