I've always had this theory about relationships called the Two-Year Hump -- which I probably picked up from a cult classic movie or a friend along the way -- that refers to the point in which we seriously consider whether we want to continue investing time and effort into a relationship or to leave it and move on.

Usually by this two-year mark, we've been able to observe our partner in just about every situation that will help us determine who they really are -- most importantly, crisis situations.  Are they "ride or die" or do they bail on you when you need them most?  It's only when someone is out of their own comfort zone and/or not getting their way that you get a glance at their true character.  This realization is what makes or breaks a relationship, in my eyes.

Today is my second anniversary of dating Alvaro.  And while it's no first of mine to be in a long-term relationship that has exceeded this two-year triumph; I know in my heart where things are headed when I get here. So, even though I jumped {my own theoretical} gun and got engaged around the 16-month mark, I'm confident enough to say that this is the guy I wanna be humpin' with Fo-eva.


So, Happy Anniversary, Baby! Here's a lil look back at how we got to this marvelous milestone in our relationship:

Two years ago today, I took a photo of this cute boy (with way too much hair and a hobo-looking shirt) who played in my cousin's band after their show in Barranco. 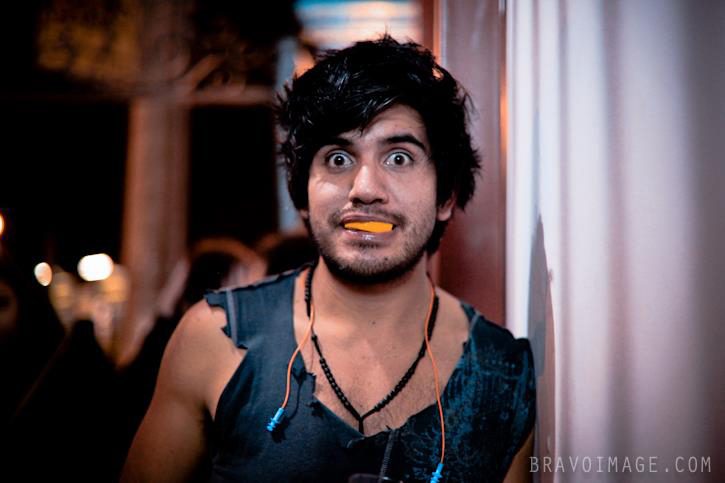 I had initially met him back in April when I was taking pics of said band for their album cover. I was intrigued at first glance and a little disappointed when my cousin said he was dating someone so I just left it at that and didn't speak to him again until this night, five months later.

He was sans girlfriend, so I investigated and asked him straight up, "where's your girl?"

"We broke up two months ago," he replied, not looking too broken up about it.

"That's too bad... if you need a friend or someone to talk to...," I said with a pendeja ass grin and leaned against the white wall just as he was.

He laughed shyly and with an equally pendejo look in his eye and said, "Puede ser... [Possibly]."

We went to a club with a bunch of friends later that night and ended up making out on the dance floor - I know, such a hussy - but we had undeniable chemistry, and I had one too many rum and cokes... it was a great time.

We started going out regularly after that and exactly one month later, we took a trip to Huacachina in Ica, Peru with some friends and began falling for each other slowly but surely... 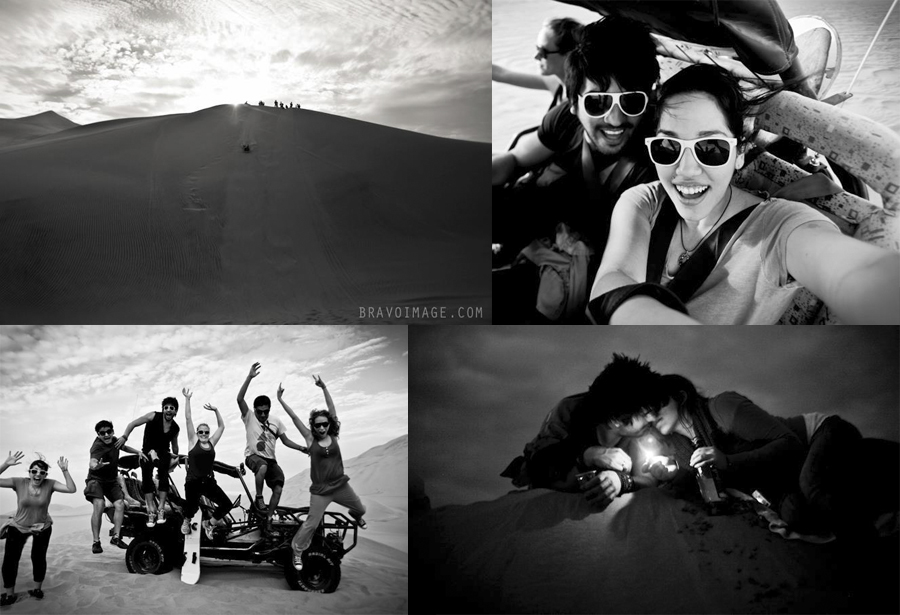 A month after that, he confessed he was smitten on this lovely restaurant balcony over the ocean.
I. melted. 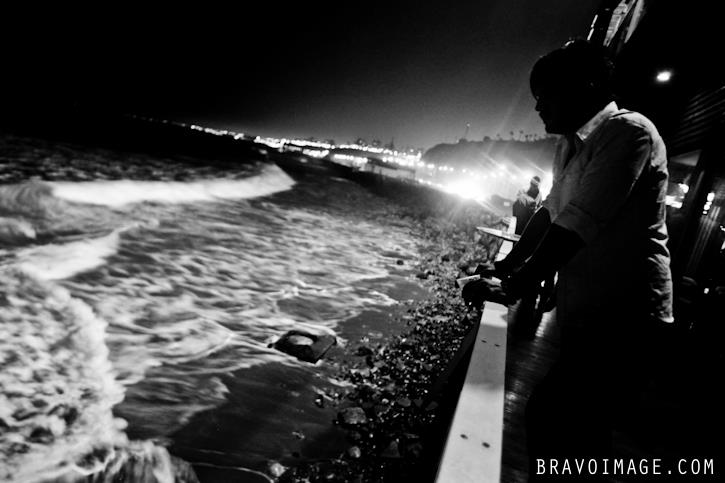 The subsequent months were a blast; hangin' around Lima, learning the ropes about our different cultures and getting into mischief together... 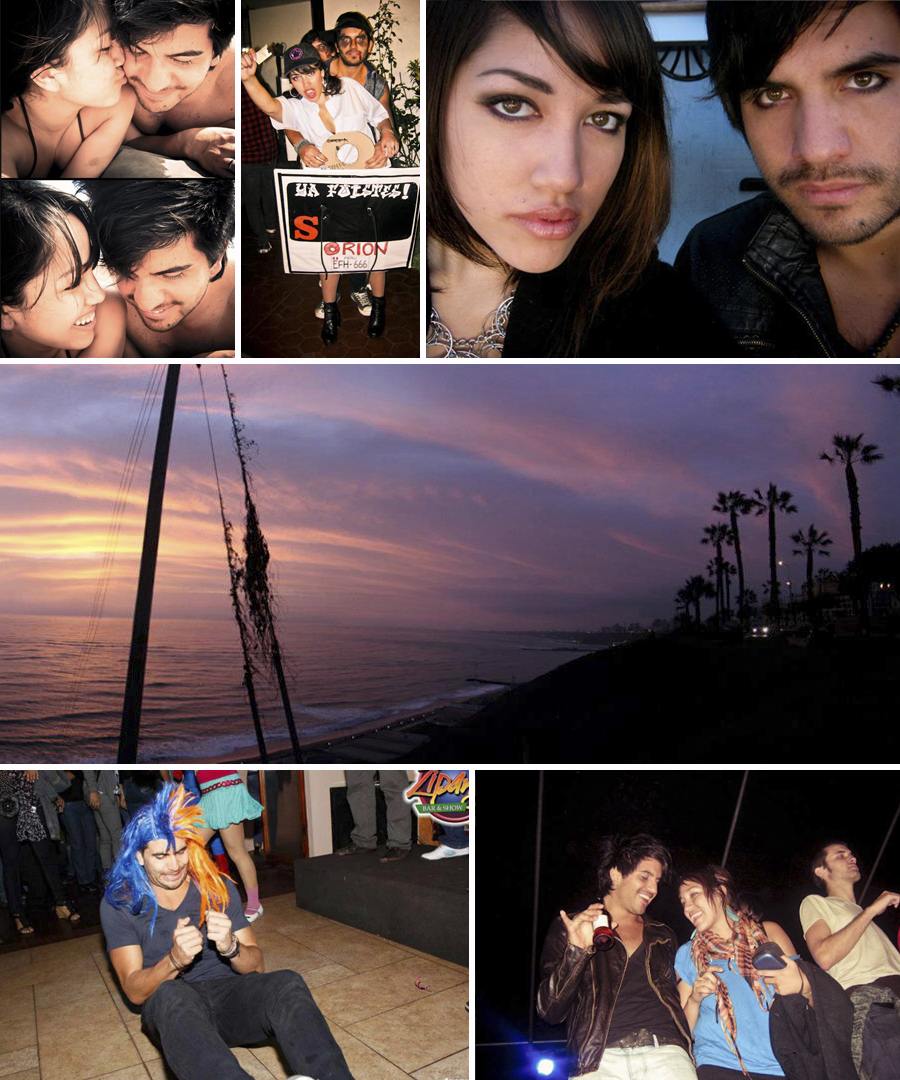 We experienced our first Semana Santa, Holy Week, in Ayacucho with a great group of friends and learned just how wild Peruvian religious holidays can truly be. 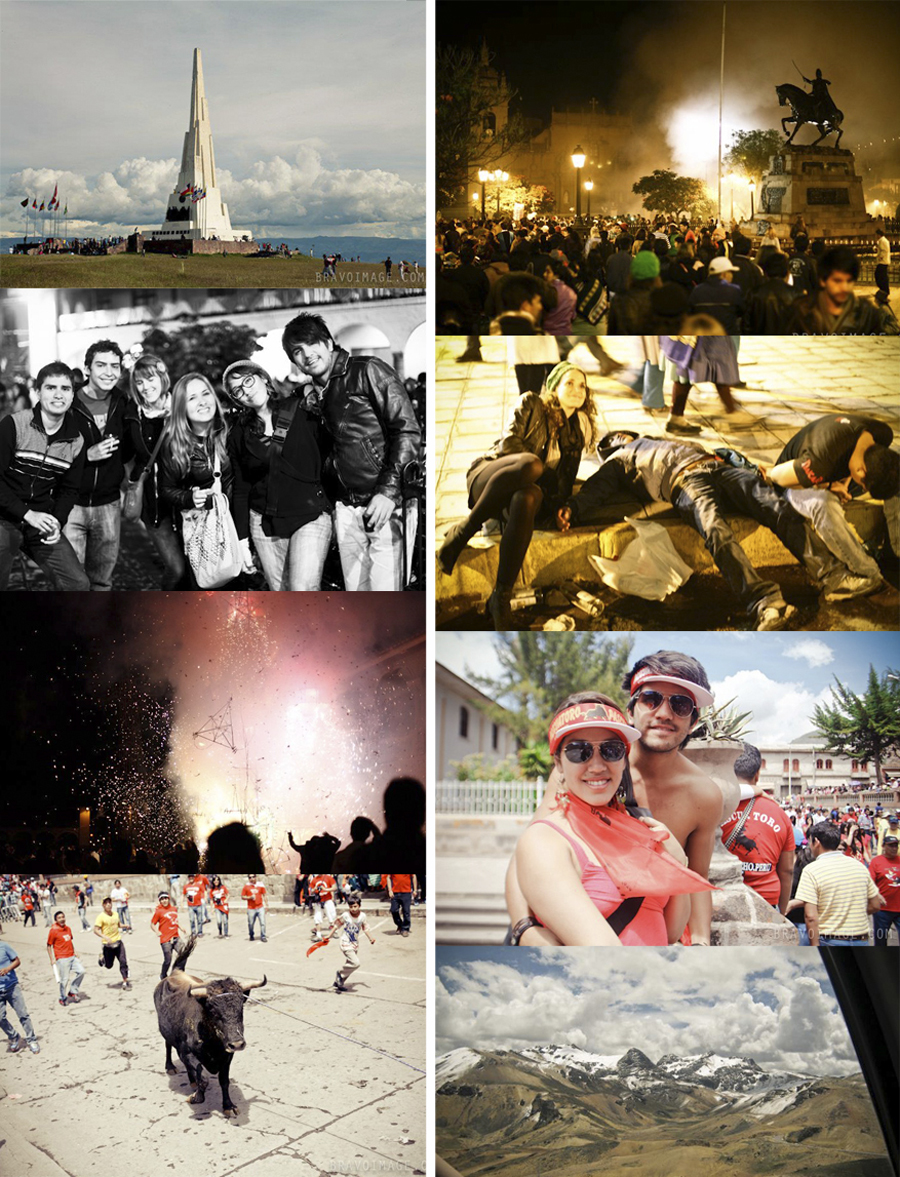 We both had a thirst for adventure and sought it out whenever possible. Like the time we stumbled upon this sweet camping spot next to a river in Callahuanca, a quaint lil town on the outskirts of Lima with an abundance of delicious exotic fruits, like chirimoya, and the plumpest avocados known to man. 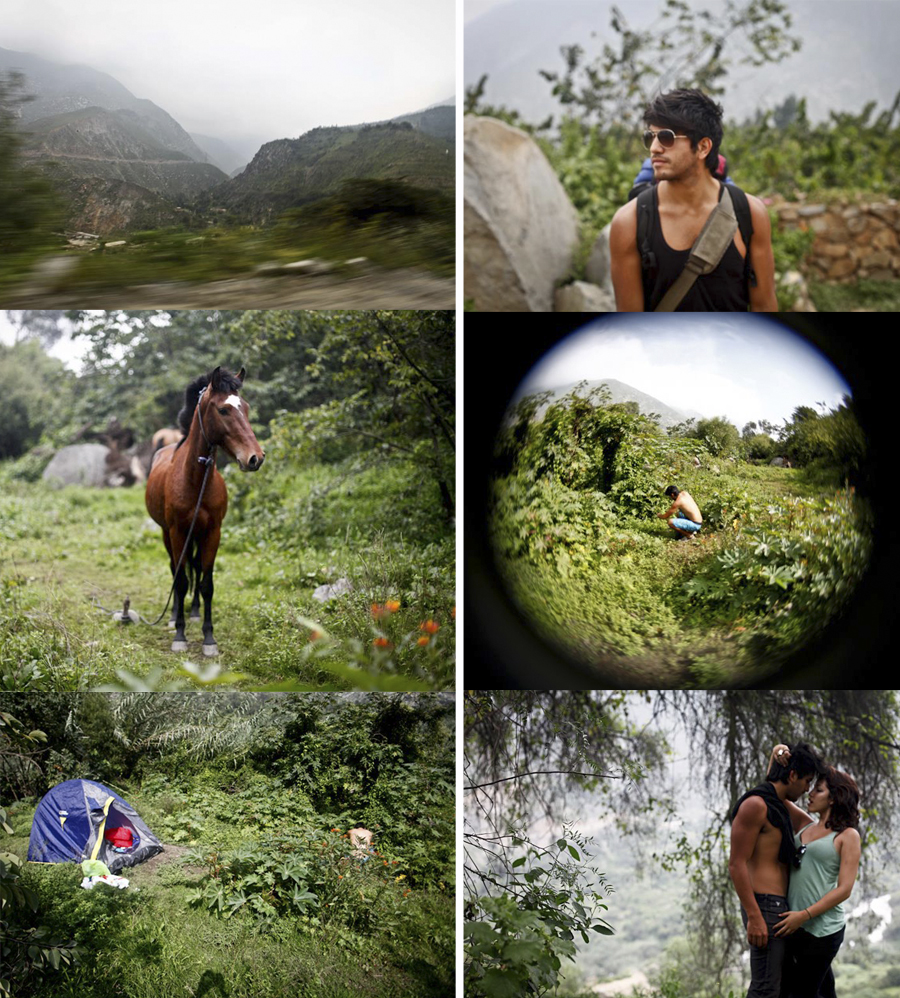 Within seven months of seeing each other, we decided to move out into our own apartment.  Something unheard of for an unmarried, young Peruvian man but completely warranted in my loving, gringa eyes. It was a bit of a rough transition for his parents at first, since he was still finishing up his degree in music production, but they came around and warmed up to the idea of us as a serious couple rather quickly.

The place we found was perfectly located in the artsy district of Barranco in Lima with an ocean view from the terrace; it was a dream.

My good friend and former co-worker, Laura, became our roommate and the best one we could've asked for - girl cooks BOMB! and we absolutely love her. We made some very fond memories in that place... and housed many a traveling friend.

In the past 18 months of living together, we've covered a lot of ground. Physically, emotionally, metaphysically - you name it. We've traveled to different parts of Peru and the U.S. together; getting lost, stumbling upon greatness, and making friends along the way.  He even got me to be comfortable with singing aloud, in public and in our apartment -- maybe a lil too comfortable, sorry neighbors! -- while he plays the guitar or keyboard and we do covers of our favorite songs. We've helped each other grow as individuals and supported each other's career goals, becoming a better team as we go and bringing out the best in each other.

We're now in a new Depa with a fabulous cityscape view a few miles away from Barranco in Miraflores, enjoying life with our two furry kids, Picasso and Dalí. 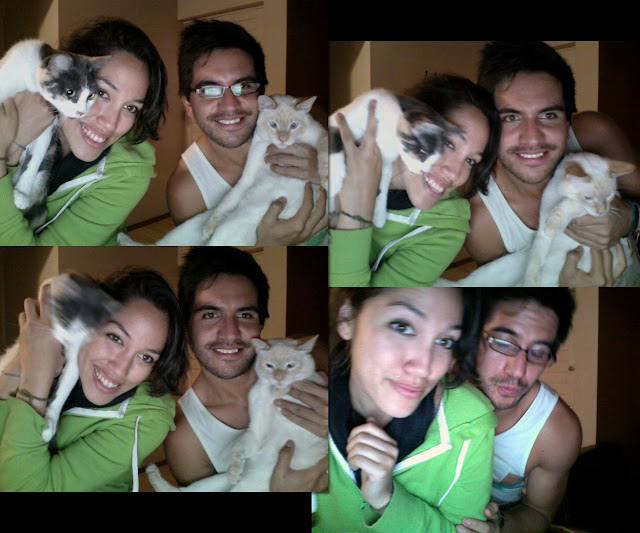 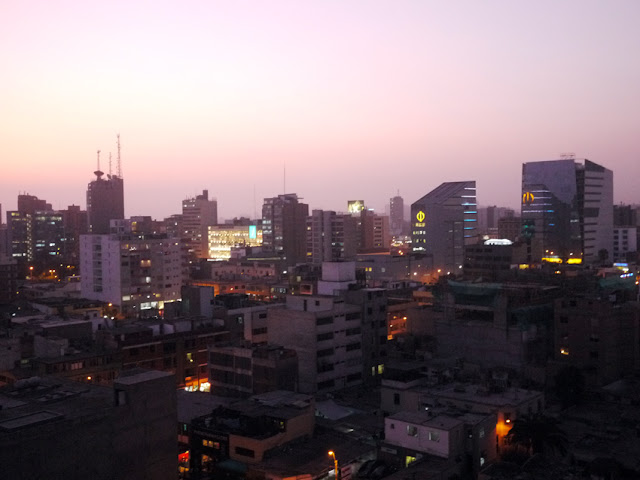 We've been through the ups and the downs, man. When you live with someone, you see it all... whether you want to or not. And then you figure out where things are headed more quickly. So maybe the "hump" is contingent on co-habitation... it definitely speeds up the process of seeing someone for who they truly are.

And what I've seen in Alvaro and in our relationship over the past two years has given me a new hope for the future -- creating a family of my own and looking forward to many, many years of travel and adventure with someone who I am ridiculously in love with.

I don't know exactly what the future has in store for us, but I do know one thing: